-[[ You see a man walking back and forth, pacing like something is eating away
at his mind.. You hear whispers from the darkness and realize that the man is not
along.. And suddenly, a red spot light falls on the man, revealing the anti-Christ
of professional wrestling himself, Vince Russo.. Vince Russo is wearing black
pants and a black, button-up dress shirt that's unbuttoned halfway down,
revealing more of his hairy chest than you want to see.. In one hand is his trusty
baseball bat and in the other hand.. Is a microphone, making you wonder exactly
where Vince Russo is.. ]]-

-[[ The other people in the room boo and you see a silhouetted hand raise up,
giving a thumbs down as Russo says those two dirty words.. You receive a quick
glance at his audience.. Sitting in the darkness in front of Russo in a row of
steel, folding chairs, you can make out Alex Shelley, Rob Conway, Gene Snitsky,
the Harris Brothers and Michelle McCool.. There's other people behind them,
but in the darkness, their heads are only shadows to you.. Vince Russo continues
speaking and the camera focuses on him once more. ]]-

[ Vince Russo ] ..Let me get this straight.. Frank Gotch and Karl Hackenschmidt
drop like fuckin' flies to make room fa' Buddy Rogers and Lou Thesz.. Who in
turn give up their spot to make way fa' Bruno Sammartino and Bob Backlund.. All
pure wrestlin' enthusiasts and God knows, they wouldn't have it any otha'
fuckin' way... But the money stops comin' in and what happens?

[ Vince Russo ] Hulkamania comes in, blows all o' that pure wrestlin' bullshit
AWAY.. Out o' da' fuckin' picture and makes more money fa' wrestlin' in a
fuckin' YEAR.. A fuckin' YEAR!! Than all o' dat mat grapplin' shit EVA'
did!!

-[[ Mumbling in the crowd as the people agree with him.. Russo continues pacing
back and forth, keeping the microphone at mouth level at all times.. ]]-

[ Vince Russo ] Alex Shelley! Name a wrestla' that stands out in ya' mind as one
of da' fuckin' greats!

-[[ Shelley stammers for a second and then spits it out. ]]-

-[[ Conway smiles, wearing his sun glasses even in this dark room. ]]-

-[[ Conway shakes his head, disappointed and then says a name. ]]-

[ Vince Russo ] Fuckin'-A, right!! All o' those guys are sports enta'tainment
SUPA' STARS!! But I keep hearin' about how pure wrestlin' is da' way to go! All
da' fans want five star matches! But I wrote for da' fuckin' Dubya' Dubya' E
fa' nearly eight fuckin' years and I neva' made one CENT off o' pure wrestlin'
but as we all know, PURE WRESTLIN' IS A HUGE FUCKIN' DRAW BECAUSE
RING O' HONOR IS THE BIGGEST MONEY MAKIN' ORGANIZATION IN DA'
HISTORY OF DA' GOD DAMN BUSINESS!!

-[[ Russo shakes his head franticly, a disgusted look on his face. ]]-

[ Vince Russo ] I am now the leada' of da' biggest sports enta'tainment
movement since nineteen ninety-fuckin'-nine and when it comes to gettin' in dat
ring and doin' your thing.. Da' first rule is dis..

[ Vince Russo ] As long as you ain't greased up, chain wrestlin' and grabbin'
each otha' like a bunch o' shitty wrestlin' relics from a fuckin' era nobody
rememba's, much less CARES ABOUT.. You can do WHATEVA' DA' FUCK YOU
WANNA DO!!

[ Vince Russo ] There's no hamma'locks.. No more fuckin' grapplin' or rest
holds.. If ya' hit the mat and start rubbin' up against each otha' and 'dat
fuckin' match lasts more than ten minutes, I'm gonna show up in ya' dressin'
room afta' da' match like Ray Liotta in Goodfella's and I'm gonna pistol whip
ya' and SET YA' FUCKIN' DICK ON FIRE, OKAY!?

-[[ The red light begins flickering as Russo continues pacing around, preaching
rampantly to his congregation.. ]]-

[ Vince Russo ] You wanna' grapple somethin'? You wanna use ya' fuckin'
hands.. Here's somethin' ya' can do with ya' hands.. STICK'EM UP GABE
SAPOLSKY'S ASS, THAT'S ONE O' MY NEW RULES!!

-[[ Russo is still pacing back and forth, sweat dripping off his brow.. ]]-

[ Vince Russo ] Ya' filmed Chris Benoit's wife in her most intimate moments
while she was at home alone!? FUCKIN' GREAT!! Know what ya' punishment is!?
Run across da' fuckin' street, get me a DOMINO'S PIZZA, BUY ME A FUCKIN'
HOOKA' AND A SIX-PACK O' BEER.. Bring it all back to da' arena because
we're gonna sit in my fuckin' office and eat pizza and fuck hooka's and watch
da' rest o' da show on a monita' and when we see Triple H on da' screen..
We're gonna flip'im off and make fun o' his big fuckin' NOSE, OKAY!?

[ Vince Russo ] And any o' da' pure wrestlin' enthusiasts we got right now that
want to convert to sports enta'tainment.. Be my guest!

-[[ Russo then turns to the camera, staring into it, dead serious. ]]-

[ Vince Russo ] I hope ya' fuckin' kids pull a Menendez on you, Ric Flair.. And
then THEY'LL be forgiven.. TEN TIMES OVA'!!

-[[ Russo then holds the bat out to his side and turns back to his audience,
speaking more calmly, more sincerity in his voice. ]]-

-[[ The future owner of Solid Gold Wrestling receives a standing ovation from
his audience as the red light goes out, bathing the entire room and everyone
inside of it in darkness.. Leaving you in darkness as well as you wonder just how
long Solid Gold Wrestling will last under the iron fist of Vince Russo and his
sports entertainment dream.. ]]- 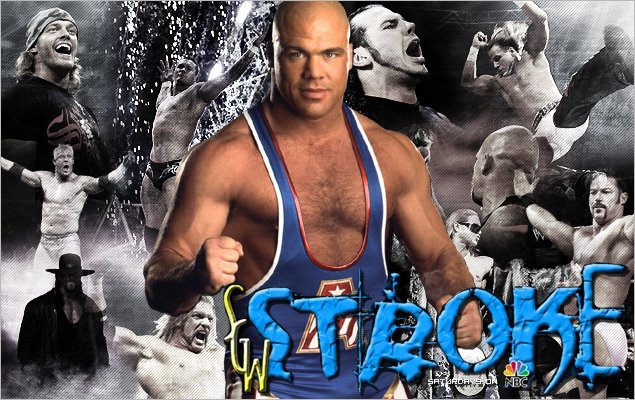